I work at a shop that is trying to anodize aluminum 6061-T6 parts with Type II anodizing. We are having a problem where a consistent 1% out of roughly 1000 parts is showing cracking in small areas on the outer diameter of the parts. The cracking penetrates as much as 300 µm which is much thicker than the anodize coat (25 µm). Has anyone encountered this before or have any idea what it could be?

Thanks for the help!

Q. Anyone care to give me their thoughts regarding the effect known as "CRAZING" of anodic surfaces?-Any experiences? Thanks, Bill.

A. Safranek's "The Properties of Electrodeposited Metals and Alloys" =>
covers the topic a bit. Anodic coatings have both very little elasticity and a lower coefficient of thermal expansion than the aluminum article they are formed on.

Result: either mechanical working or elevated temperatures can crack (craze) the coating.

Q. We have one more problem in hard anodized cooking pans. Our customer is facing "crazing" problem. i.e., cracking of hard anodic film. We would like know the preventive actions feasible to the industry to avoid this problem.

A. I have had experience with the very some problem. One of the most common causes of crazing is thermal shock to the part and coating. This usually occurs when you are moving the part from a cold anodizing bath to a hot rinse or seal. The coating and substrate expand at different rate causing the crazing. One solution to this problem is to ramp your seal temperature after the part has entered the solution. Another solution would be to slowly increase the temperatures of your rinse as your parts progress to the hot tanks.

Thank you very much for your suggestions sir. For your information, under optical microscope we have seen straight cracks (Cross sectional view - as polished condition) in the hard anodic coating & are perpendicular to the thickness of coating.

Crazing and cracks in hardcoat on internal diameter surfaces

Here are my questions: Why do the ID's surfaces appear to be cracked or crazed? Is it non-build up of hardcoat or stress cracks in the hardcoat? Additionally, how can this be eliminated? The OD's do not have these micro cracks, why not?

Thanks for the input.

Q. I manufacture aluminum medical cases. Anodize process is to specification AMS A8625 [withdrawn / link is to spec at TechStreet], Material is 5052. After anodizing parts are silkscreened and baked at a temperature of 275-300 °F for 30 minutes. The result I am getting is what my supplier calls "crazing" and he does not know how to eliminate this problem can anyone help? Also, is the anodize seal intact or has the anodize process been compromised?

The anodize coating is a ceramic, thus has the high temperature resistance of most ceramics. The problem is the large differences in thermal expansion between the aluminum base metal (expands a lot) and the thermal expansion of the ceramic anodic layer (expands a little). This can put substantial mechanical stress on the anodize. The problem is worse when the anodize layer is thicker.

Ed. note: it is our sad duty to advise of the
passing of Paul Yursis in August 2005.
Here is a brief obituary by Mike Caswell.

Crazing is due to the thermal expansion and elasticity of aluminium is much greater that that of the anodic coating.

You could do the following thing to minimize the problem:
1. use higher anodising temperature
2. lower current density
3. a final short rinse in warm water (approx. 40 °C) 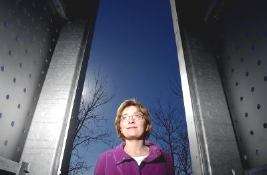 A. Another option would be to silk screen it with dyes made for anodizing prior to sealing the part. You can find a method or two describing how to do this in "The Surface Treatment of Aluminum and Its Alloys" by Wernick, Pinner and Sheasby, or you can contact anodizers that specialize in this practice and have them put on whatever design it is you are silk screening.

A. The best practice for high temperature painting is insure the anodic layer is around 5 µm to 8 µm - this allows painting up to 200 °C with no issues. Standard practice at most exterior trim anodize aluminum suppliers.

Q. Is it possible to tell if the crazing or cracking of anodized 2024 part is the result of stress (high loads) or the result of chemical attack from a fluid by the crack pattern? In other words, does linear crack lines indicated stress induced crazing compared to curved or irregular crack lines which would be the result of fluid attack? Anodize thickness .0004" .

A. Crazing or cracking of anodic coatings is commonly due to mechanical stress, either applied load or differential thermal expansion. Bending causes linear, parallel cracks transverse to the bending, with cracks sometimes visible to the naked eye on the convex side of the bending. Point loading, as from a hardness indenter, creates radial cracking. Non-anodizing inclusions can also create anodize blisters and radial cracking. Crazing from thermal stresses can be 'dried lakebed' (except flat) or wavy lines (like wrinkled paint, but flat).

I have never seen nor read of cracks in anodize due solely to fluid attack. Fluids may possibly wick into crazing and, via etching or corrosion, create visible cracks. What is the fluid? 2024-T6? Cold worked and/or machined surface? Are inside or outside corners involved? Conventional, sealed sulfuric anodize ( Mil-A-8625 [link is to free spec spec at Defense Logistics Agency, dla.mil]F, Type II? Dyed? Thermal history, beginning with anodize bath? Please post a photo, maybe at 200x magnification.

Q. My name is Nigel Bell and I am the Process Technician for Protective Finishing at RLC UK Ltd. We process parts for aerospace. We have had a reject on an anodised component. The fault I have never seen before. On the anodised coating there appears to be a crazed/ cracking like finish evident on the finished anodised surface. This is purely visible and has no depth. There is no catching for example with a thumb nail in the indication as would be expected in a scratch or real life crack. Prior to anodise the marks are not visible.

Photo of part formed - plus 3 photos of lines visible after anodizing; not visible prior to anodise; no depth. 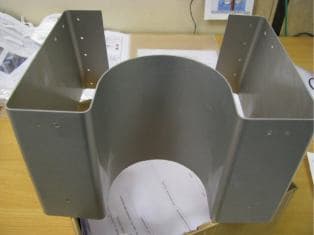 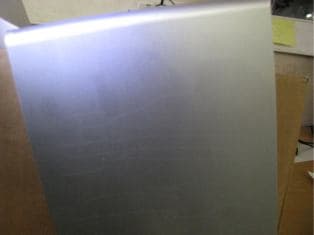 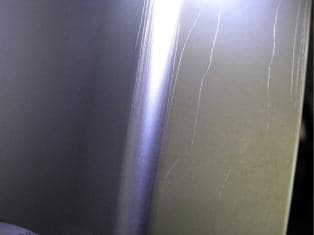 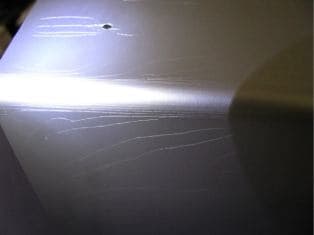 In a past life, we hard anodized 3003 aluminum IC carriers that had comparable wall thickness. Our crazing was much more pronounced, and caused by the difference in co-efficient of expansion (search this site). The crazing occurred when we placed the parts in the rinse tank from the hard anodize tank. The crazing was audible as the part was introduced to the rinse. Adjustments in rinsing technique reduced the amount of crazing, but entirely.

Visually, the crazing might be objectionable, but you might test to see if the coating meets performance specifications.

Willie, Thanks for your response. We did feel that rinsing or sealing was a contributing factor in the 'crazing' on the anodised surface. We did in fact have a coating thickness of 40 microns on the component which was more than double the maximum specification requirement for this part. We have since stripped the part and the 'crazing' has gone. We are going to re-anodise to the required film thickness of 7.62 - 17.78 microns and seal in boiling water. It has also been suggested that the excessive anodise coating and the subsequent hot water sealing may have contributed to the 'crazing'. Any more comments would certainly help.Thanks again.

We produce various aluminium parts and anodize some of them. Last month we anodized "towel radiators". Customer had ordered: "bright anodized, 10 micron".

We anodized it but 1 week later customer complained about "crazing". He said that it was crazed after hot water circulation. We had inspected profiles; we have seen all defects with crazing appearance like cobweb.

What's the source of this defect? Any comments?

A. I see "scratches" but do not see "crazing". Come back with the alloy, coating thickness, and temp of the hot water. Be aware that cracking starts at 80 °C and gets worse with higher temp.

Q. Dear Robert,
I don't agree with you. That appearance as you can see is not "scratches". In my opinion,"crazing" appearance is quite obvious like cobweb. I don't think it relates with alloy. We use hot rinsing (70 ° C) after cold sealing. Also I measured coating thickness with Fischer Dualscope -- we found out between 15-20 microns.

Q. I have only two questions at this point;

1- if we make between 5-10 micron coating thickness, then can we say: "crazing will never occur"?

2- can we say: "polished anodized (natural, like attached pic) profiles every time are a high risk group for crazing problems? If we make matte anodizing instead of polished ones, will we get the same crazing results? In short, if we compare polished (bright)/matte anodize for crazing aspect, will same results occur?

I think if you only change the coating thickness, the crazing will still occur, but due to the thinner coating, it will not be as noticeable. I suspect the alloy choice is a factor, although I can't guide you as to which would be better.

One way to determine if an alloy would craze under similar circumstances would be to seal the anodize in a boiling solution. Hard to believe the parts are crazing in the field if they were hot sealed in your shop.