A discussion started in 1998 but continuing through 2019

Q. The chrome plating on motorcycle exhaust systems discolors to a dark blue in almost all cases. This is assumed to be due to the heat effects and oxidation. It has been expressed in some circles that the bluing is due mainly to the copper underplate and should be eliminated if the copper was not used and the nickel was applied directly to the steel. What do the experts think?

Q. I would like to remove some of the bluing that has occurred on my motorcycle's single wall exhaust tubing near the engine heads. Is there a product that will remove the bluing? Chrome polish doesn't seem to touch it.

A. To simulate this process you can use a battery charger

[paid link to product info at Amazon] , a piece of copper tubing, some fiberglass cloth to cover the tubing, and some watered down Muriatic Acid [paid link to product info at Amazon] about 2 parts water to 1 part acid. Wrap the fiberglass around the tubing. Hook up the negative clamp to the tubing and the positive to the muffler. Turn on the battery charger to start mode, about 60 amps at 12 volts setting, and then dip the fiberglass into the acid and rub the area to be cleaned. The blue magically disappears. IMPORTANT: wipe off with water and wash right away. Try this on a scrap piece if you can first.

Q. I have seen exhaust pipes (attached at the hot section at the exhaust port on air cooled motorcycle engines) plated to a gold color. I suspect this is some sort of nitride plating. The base metal of my exhaust system (BMW twin cylinder engine) is stainless (not sure which alloy) and the OEM plating is nickel and chrome. These pipes get quite hot (dark cherry observed at night) and are decorative in nature (exposed). Can someone identify the plating I refer to and tell me where I can get this plating done? (Houston, Texas area). Also, is this plating I refer to durable and resistant to the heat I describe? 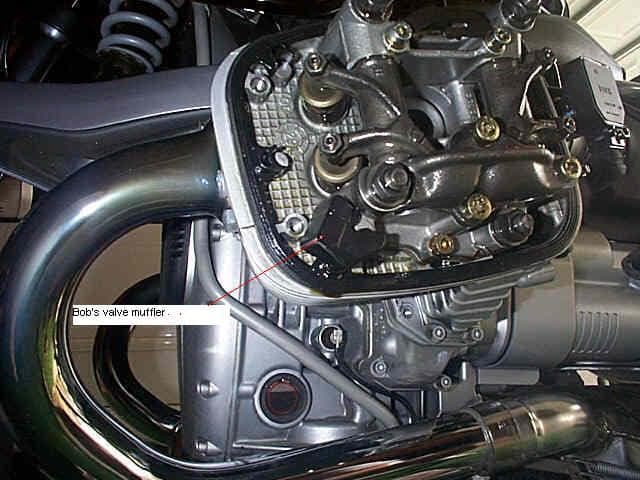 I doubt that your pipes are plated a "Gold color"; more than likely it is discoloration of the existing plating from the exhaust heat or a ceramic coating process. Even Stainless Steel will discolor when exposed to temperatures that engine exhausts produce. There are several commercial products out there that might help to clear the discoloration. Check with your local bike shop for their ideas. Hope this helps.

Q. I am trying to find out why nickel chrome plated surfaces change color when exposed to extreme temperatures. I also need to know if there is any commercial process that can increase the temperature at which this discoloration occurs. I am seeing a yellowing of the chrome surface followed by a a strong blue. I have had an SMD analysis done that showed an increased presence of Ni and O at the yellowed areas. I was informed that this suggests the presence of nickel oxide, caused by passivation of a nickel chrome surface exposed to oxygen at high temperatures. Any information or direction is greatly appreciated.

Bright Nickel plated surfaces do contain sulfur in the form of sulfides which make the Nickel active and receptive to oxidation.

I would consider a Semi Bright Nickel finish from a Sulfur free bath. Or a Dull Nickel bath.

I don't agree with Mr. Nurie. Because this situation depends on chrome layer and its thickness and also what temperature has been exposed. Because, if temperature exceeds 300-400 °C, the chrome layer gets deformed and cracked. So in this event, nickel layer appears. Also, in my opinion, I consider this situation depends on number of the cracks at chrome layer. If these cracks number is getting high, this part's corrosion resistance will decrease, so, same event will occur.

I forgot to mention that this is a cosmetic part requiring a Bright finish, which is why the discoloration is so unacceptable.

A Bright Nickel plated component exposed to high temp. will in the presence of co-deposited Sulfur tend to show symptoms you have described.

Examples of Motorbike mufflers are legion.

Suggest you stay with Sulfur free Nickel, followed by chrome 0.25 to 0.3 microns thick.

Q. I am a motorcycle owner whose chrome exhaust is bluing terribly. I'm interested in learning more about the answer typed by John B of Springfield, Michigan. It seems incomplete and, since it appears that the procedure could be dangerous - with battery charger and acid and all - I was wondering if all the facts are disclosed and how often the process must be repeated, if at all.
Thanks

A. Yes, it's dangerous to use muriatic acid if you're not trained in its use. Further, it can destroy the chrome plating, leaving only the underlying nickel plating. If you want a second opinion, I don't think it's a good idea at all.

RFQ: What about finding perhaps a metal shop or some other business that may do the procedure for a fee?

Q. What is the chemistry behind the process whereby chrome plating turns gold then brown when heated, and is this process reversible with polishes.

A. Hi Chris. Thread 26051 claims that it is possible to plate these in such a way that they will not discolor. And the heart of it is, as Asif previously said, to plate a pure nickel with no brighteners or additives, then manually polish it to brightness before chrome plating. Self-leveling nickel was a great labor saving boon, but high temperature operation is a case where the leveling agents are inappropriate. Good luck.

Q. Can anyone tell me how to remove the blue/brown discoloration that forms on chrome tailpipes? I have tried many of the over the counter products with no real results. There must be a chemical that really works so that you don't need to get them re-done.

A. Muriatic acid will not destroy chrome in watered down concentrations. In fact, I use it all the time to remove scuffed cylinders in engines where aluminum has transferred from pistons to cylinder walls to remove the aluminum and leave the chrome liner unharmed. It works very well and I have never seen, or heard, about Muriatic acid eating chrome. That said, I would think that using it to remove bluing on the pipes as he suggested would be worth a shot. It sounds feasible what with the current flow and the acid reacting with the current. I will be trying it on some old blue pipes I have to see if it works. Stay tuned.

Thanks Steve, but muriatic acid is exactly the material that plating shops use for quickly stripping chrome. If you have the time for one of finishing.com's longest and most rambling threads, but one of our most informative and entertaining, see letter 12044 How to make hydrochloric (muriatic) acid :-)

Yes, if something is diluted, it won't work as fast as when not diluted; but if I wanted to avoid stripping the chrome, I wouldn't pick the material known for stripping it best. Also, note that the total thickness of the chrome plating on decorative nickel-chrome is often just 5 millionths of an inch -- an amount you'd never notice or measure in your line of work.

September 4, 2009 -- this entry appended to this thread by editor in lieu of spawning a duplicative thread

We have a motor bike modifying unit. Most of our customers object to silencer and exhaust pipe bluing (those were Ni/Cr plated). After running over a 1000 km, plated silencer colour changed to dark blue.
We want to know how to avoid it. Is there any specific process design for above-said parts while plating. Please help us.

----
Ed. note: See previous replies where it is claimed that you must do the nickel plating without brighteners/leveling agents, and hand buff to brightness.

Q. I have recently had a 2 stroke expansion chamber (exhaust) chrome plated, it looks great!
I am aware that it will turn purple, blue and gold from the heat, I sort of like the look anyway. Since this is going to happen I would like to know if there is a temperature color chart so that I can tell what temperature the pipe is getting in specific locations.
This could be a great tool to assist in getting my tuning correct.
Thanks,

A. Hi, Bill. I don't think you will find any such chart since the discoloration depends on the process sequence and the brighteners in the nickel plating as well as the temperature. But there are inexpensive paste-on temperature gauges that turn color at different temperatures.

September 12, 2012 -- this entry appended to this thread by editor in lieu of spawning a duplicative thread

Q. I am restoring an old wood-burning stove that has many chrome plated parts. The main door, which is chrome plated, has a large area that has turned bluish-yellow -- I'm assuming from too much heat. So what now? Do we need to have the door re-chromed or is there a treatment that would restore the chrome luster? Thanks for any advice!

November 22, 2019 -- this entry appended to this thread by editor in lieu of spawning a duplicative thread

Q. Hello My name is Jack Freeman, I am the production manager at a wood stove manufacturing company. We occasionally get a batch of our stove doors that will turn a purple color when customers fire their stove. The doors are cast iron that has been polished smooth, plated with nickel, brushed, then finished with a trivalent chrome. We test each batch we receive from our plater to 600 °F as that is how hot a wood stove door can get. Too often they fail the test and I have found, oddly enough, that a vigorous sanding with a non-woven (Scotch-brite) pad will remove the purple film and it will not return. Can anyone tell me what is happening and if there is a better process that will stand up to the heat? What if it were just nickel plated then brushed w/o the chrome, would that have better heat resistance? I attach a photo. Thanks.

A. Hi Jack. Smarter people than me have suggested on this thread and others that the sulfur-bearing organic brighteners used in the nickel plating are the culprit. But I do believe it, and suspect that you are removing the chrome and topmost nickel with your scotch-brite routine.

Have your plating shop try plating the nickel with no brighteners/addition agents, and manually buff to desired brightness before chrome plating. Good luck.

A. Hi again. Trivalent chromium tends to be proprietary, and I'm not aware of studies regarding using it in high heat applications. But since we know that sulfurized nickel plating is a problem, I'd look at that before worrying about something that might or might not be a problem :-)