A discussion started in 1996 but continuing through 2020

Q. My initial question may be not clear; sorry about that. We are CLEANING parts, not plating parts. We just simply clean parts in ultrasound tank with Omegaclean solvent (by Omegasonics). Thanks.

A. For hydrogen embrittlement to occur, generally two factors must be present: (1) a mechanism for producing hydrogen, and (2) a process that seals the hydrogen into the substrate. Since neither of these two factors would appear to be present in your process, one can reasonable assume that it is hydrogen-embrittlement-free. 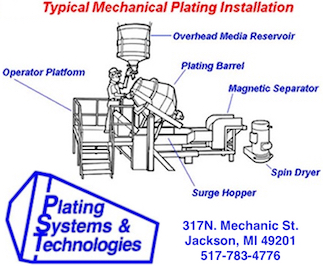 Q. Out of curiousity, is the 'process that seals' required? I always thought that just exposure such as cathodic cleaning or acid etching was sufficient to pose a risk.

A. Hydrogen generated during cleaning or pickling (or etching) is usually considered "self-relieving" in that the hydrogen can escape easily. That is why phosphating and mechanical plating (to name two non-embrittling processes) are considered non-embrittling processes. Parts tested immediately after plating may exhibit transient hydrogen embrittlement, but this goes away as the hydrogen escapes at room temperature without baking.

Is hydrogen embrittlement a problem if plated parts are stripped immediately?

Q. If parts are plated, and the plating is stripped almost immediately due to a plating defect, is hydrogen embrittlement still a concern, given that the "sealing process" has been conducted but removed soon after?

A. Current 'best practice' is to bake within one hour of plating. If your 'almost immediately' is within one hour you have a defensible position if the parts break. And they might.

March 15, 2017 -- this entry appended to this thread by editor in lieu of spawning a duplicative thread

Q. Is anybody aware of a simple test to validate that hydrogen embrittlement was not introduced into a batch of helical compression springs (not necessarily a full proof test but one that will catch provide some assurance against gross processing errors). We have many zinc electroplated music wire springs produced for our products. I know of simple bolt tests where a sample qty is torqued to 80% of failure, let rest under load for 24 hours, release torque and reapply same torque. A break is a strong indicator that HE is present. For more assurance, check again at 48 and 72 hours. I am considering a specification that the supplier load the springs to solid height for 24 hours and a break is a failure. Possibly add a release and reapply step. However, every spring is different and the stress at solid height might not be significant enough to induce an embrittlement failure. Thank you

A. Hi Scott,
Do you employ a de-embrittlement step after plating? If not, 8 hrs. in an oven at 200 °C will remove hydrogen that can lead to embrittlement. So a test should only be needed afterwards for verification if you wish. This should be done as soon as possible after plating, no more than 4 hrs. and preferably within 1 hr.
Best regards

Mark Lees
- A cold rock in the Irish Sea

A. Hi Scott,
There is a test you can do.
If you plate notched bars alongside the springs they can be used to test for embrittlement, via tensile testing.
ASTM F519 [affil. link to spec at Techstreet] will tell you all you need to know about the test and what constitutes a pass or fail.
Good luck

Q. I am planning to carry out hydrogen de-embrittlement baking for a set of parts -- a cycle of 200 °C for 8 hours.
The parts can only be plated one at a time due to their large size (zinc nickel plating on a high strength steel). The plating cycle is 1 hour but the baking duration is 8 hours -- hence cycle time mismatch for production planning.
I need to know whether it would be permissible to interrupt the baking process during hydrogen de-embrittlement for a short while, in order to open the oven doors and add another component into the oven, so that I can plan production for at least 2 parts one after the other. The oven can hold 2 parts at a time.
The oven temperature would probably drop from 200 °C to 100 °C in the interval when the doors are open.
It might take another 20-30 minutes for the temperature to climb back up to °C.
Will the drop in temperature due to the interruption adversely affect the HE process ?
Thanks in advance!

A. Hi Ravi,
I would suggest adding time to the eight hours. The addition would be equal to the amount of time the item was not heated at 200 due to re-loading, perhaps thirty minutes as mentioned in your post. 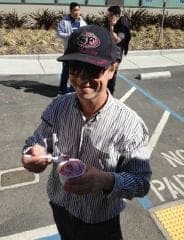 Thanks a lot, Blake. Appreciate your response. It is immensely helpful.

Q. Although it has appeared once earlier on this thread, albeit in a very brief manner, I would like to ask again the following:
If we have to strip the part immediately after plating for rework, does it need to be de-embrittled before replating? If yes, how many hours; which standard clearly mentions the times and temperatures for stripping rework? Would be using HCL solution say 20%, for stripping.

Q. THIS IS ELVIS INDARTE. IN THE LAST THREE MONTHS I'M HAVING PROBLEMS WITH HYDROGEN EMBRITTLEMENT FAILURES IN TESTING NOTCHES FOR SILVER PLATING. THE STRESS RELIEF IS DONE IMMEDIATELY IN A 15 MINUTES PERIOD AFTER PLATING AND I BAKE THE NOTCHES 375 °F FOR 8 HOURS PRIOR TO PLATE AND 375 °F FOR 23 HOURS AFTER PLATE. THE PARAMETERS OF THE SOLUTION ARE GOOD WITH A LITTLE HIGH CARBONATE. I AM STOPPED WITH THE SILVER PLATE UNTIL I GET A SOLUTION, CAN SOMEBODY HELP ME? I DON'T NOT WHAT TO DO?

In letter 8254 our colleague James Watts gave an ambiguous answer about this topic. EN does add some hydrogen to the structure of the metal, but less than electrolytic nickel. The hydrogen forms in the pickling process prior to plating, and the nickel layer traps it in the metal structure.

Baking is the only way you can reduce the hydrogen levels, and the risk of part failure.

So, it depends of your part prior to plate (shape, hardness, material, microstructure) and how it is used (torque, tension clamp, friction coefficient) to assess risk and need of baking to relieve embrittlement.

ASTM B733 [affil. link to spec at Techstreet] guides you in choosing the best pretreatments and baking processes in order to minimize risks of failure by hydrogen embrittlement.

Q. Hi,
My plating supplier made a process error, parts that were already baked, was re-baked again.

I would like to know if the parts can directly go to chromating or we should do HT process -> Baking again?

A. Hi Ahras. To my knowledge the temperatures used for hydrogen de-embrittlement are much lower than for heat treatment. So baking, whether done once or twice, should not affect the heat treatment. However, you may find it difficult to chromate the plating if a lot of time has gone by.

Does Metal Spraying Cause Hydrogen Embrittlement?

Q. John from South Africa here. I am molybdenum spraying Titanium Ti-6AL-4V wing attachment pins and would appreciate it if I could find some guidance on whether baking is required to remove hydrogen after plating. Temperature and duration would be appreciated. Thanks.

Q. I have a bolt that is 15-5PH H/T 180-200 KSI that has hydrogen embrittlement occurring after hard chrome plate. The part is processed in two plating operations. One operation is to plate the shank and the other to plate the washer pad (underneath the head of the bolt). The part gets activated in sulfuric HF anodically and then plated. Plating time is 6-12 hours per operation. Parts are baked before plate for 4 hours at 375 °F and after plating for 24 hours at 375 °F. The part goes in the oven after plating within 2 hours.

Embrittlement is time-dependent. You have a break in plating, which, I assume, is being used to strip masking and reapply masking to other areas before continuing plating. If this is the case, I would suggest you need two de-embrittlement operations, after each plating operation. This should eliminate the risk of embrittlement due to the break in plating.

Q. I am constrained to use sulfuric HF for activation, alkaline cleaner for cleaning the part, and chrome plating solution. The only thing I can do to reduce HE is baking in the oven. Seems not to do anything increasing the bake time. Any suggestions?

Did you follow the AMS2759/9 [affil. link to spec at Techstreet]?
If you follow it I think that the problem will be solved.

A. Hi. It sounds like you have no choice but to modify the cleaning, masking, plating cycle Orlando. It seems to me that Brian is implying that the HE damage is done before the parts even get to the oven, such that by then baking can't fix it. Sadly --

"The Moving Finger writes; and, having writ,
Moves on: nor all thy Piety nor Wit
Shall lure it back to cancel half a Line,
Nor all thy Tears wash out a Word of it." --Omar Khayyám

A. Hi Orlando,
Your answer from Dec. 14 does not refer to Brian's recommendation from Dec. 6.
Let me explain: To prevent hydrogen embrittlement (HE) the baking must begin ASAP after plating and never more than 4 hours after plating. Otherwise H atoms join to H2 molecule and cannot diffuse out of metal matrix.
So, if you have two different locations to plate, you have to bake the part after each plating step.

Hello, I work in the automotive industry and have been working in supply management for about 4 years.

Right now I've been facing a problem with H.E. on a bracket - lift hook, material is steel 1008 (low carbon) with a thickness of 4 mm.

After a focused analysis because of fracture problems, we found that the parts were going into failure due to Hydrogen Embrittlement.

However, I've noticed that the surface hardness of the final product changed as well. From min. 58 HRC (old process) to min. 40 HRC (current process).

Does this make sense? Can we say we are expecting a reduction on the surface hardness after a baking process for HE Relief of 8 hours at 140 °C + 4 hours of natural cooling?