A discussion started in 2004 but continuing through 2020

Q. I would like to know what causes pits in 7000 series aluminum. I am not sure about the type of anodize process, we just ask for black. I The pit appears to be burned. 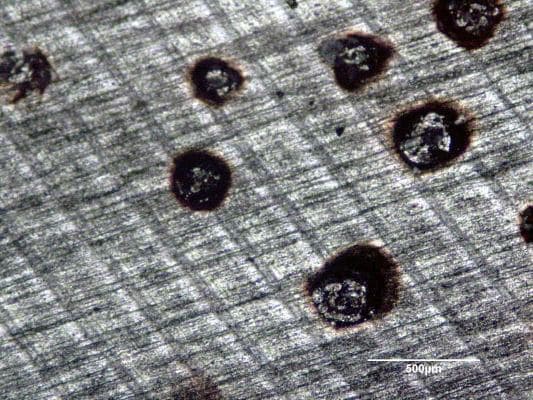 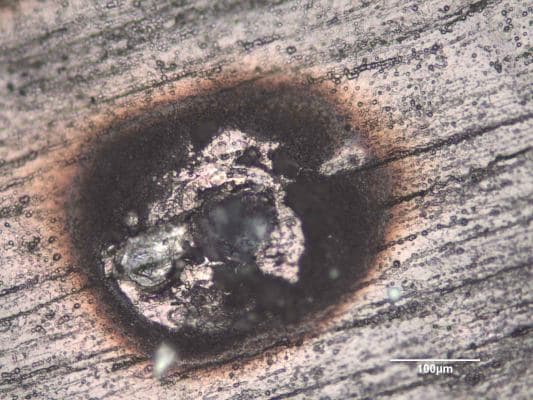 I was once told that it is the Zinc in the 7075 etching out, but I don't understand why this would not always happen. These pits were created during the anodizing process.

A. From the pictures it seems that the base metal has been sanded in two directions. It is also my wildest guess that the sandpaper had been used on steel during the night shift when no one was looking. THe next day when you sanded the aluminum you imbedded small iron particles into the soft Kleenex-like aluminum. Then when you anodized the iron particles which do not "anodize" drew more current and the heat chewed away at the aluminum leaving a burned appearance.

Try some virgin 7075 that has non been mechanically messed up. There is no reason for 7075 to selectively have burned spots unless something else in those spots drew more current.

Another test you can perform to satisfy your own curiosity is to insert a small iron sheet metal screw and put it thru the line - then observe the burned spot.

Q. The surface is as-machined in a CNC mill. The lines are milling lines. I have no reason to believe that the carbide tool would leave particles in the surface. I have also seen this in turned parts and on as-extruded surfaces.

Q. I have been able to do some additional work on this pitting problem. I used an energy dispersive x-ray attachment on a scanning electron microscope to determine that at the center of each pit is copper. Copper is one of the main alloying elements in 7075 and is a second phase in the microstructure. So I now understand that the copper is etching preferentially during the anodizing process but I still do not understand why it does not happen all the time with 7075. Is it something to do with the deoxidizing step?

A. We had seen this problem years ago & then I found an article describing the problem. It was in August 2000 "Products Finishing" & it is titled "Anodic Coating Blisters on 7075".

We eliminated the problem by reducing time in all tanks to a minimum - especially the black dye.

Q. A supplier is claiming he cannot bright anodize 7075-T6 due to its copper content.
He says putting it in a caustic etch will make it black in colour.
Being relatively new to anodization I don't have all the facts but shouldn't a brightening dip be acid based, sulphuric or other.
And isn't it possible to bright anodize 7075-T6?
Would really appreciate some help with this really general query.

That caustic etching leaves a black smut on 7075 is hardly relevant, as a) the smut is easily removed by deox/desmut solution and b) caustic etching should be omitted or at least minimized prior to bright dipping.

Most anodizers do not have bright dip (chemical polishing) solutions, and not all bright dip solutions are suitable for 7075. Some phosphoric-sulfuric-nitric acid bright dips (including some Alupol & Phosbrite versions) can be used on alloys up to 8% Zn and 5% Cu. See The Surface Treatment and Finishing of Aluminum and Its Alloys, pages 110-116, 6th Edn.

A. Surely it's possible to bright anodize 7075-T6. There are other etchants besides caustic. Even castings can be brightened for anodizing.

Q. We are producing a series of parts for the first time and are having a cosmetic issue with the anodizing. We are seeing dark streak that appear to be related to the grain structure of the metal (7050 AL). The anodize is a green color and the streaks are very subtle, but the cosmetic requirements are very strict. 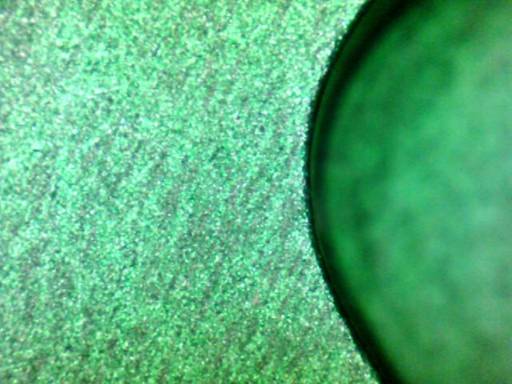 We are using a new source for anodizing so I want to get some additional input from knowledgeable sources as well. Any help is appreciated.

A. Although lacking the process history, a reasonable guess is that excessive alkaline etching accentuated the grain structure and roughened the surface. For this alloy, about Al-6.2Zn-2.3Cu-2.2Mg-(<0.8%)other, an acidic etch is preferable if etching is required (e.g., to hide machining marks).

Some speckling is typical of anodized 7000-series alloys although it's often rather attractive.

A. The zinc in the 7000 series migrates to the grain boundaries with time and temperature (as in heat treatment or work hardening). This zinc left on the surface plates away when caught "out-of-alloy" on the surface and leave behind "mini-pits". Some 7000 metal, depending on the heat treatment absolutely is non-anodizable to a quality finish.
The streaks may be related to the rolling mill lines or the machining lines combined with the exiting of the zinc from then surface.

Try a lessor alkaline etch. Try a proprietary mixed acid deox. Then try a slower ramp on the start-up of anodizing, otherwise choose a different alloy and/or heat treatment.

Inconsistency in Black Dye Appearance on 7075

Q. We have noticed an inconsistent appearance on many of our 7075 parts after pulling them from the black dye. We're using new titanium racks, freshly charged solutions in all of the prep tanks, new cable running from the rectifier (and even a new rectifier), and we still get some parts coming out with a nice, semi-gloss appearance, while others have a matt look to them and the dye rubs off. The only thing we haven't yet done is to replace the dye tank and we still haven't tried a strong, ammonium bifluoride / nitric desmut. It doesn't have the characteristics of a chemical problem, however, as chemistry cannot tell the difference between one part and another. I'm starting to think my customer has substandard alloy.
Thanks for your ideas.

If some parts dye well and others don't, the dyestuff is not suspect. The powdery coating (wipes off black on a fingertip) suggest over-anodized/burned. Possibilities include inadequate solution agitation in your anodize bath; excessive dissolved aluminum; poor anode:cathode ratio; and poor electrical contact/racking.

If you perform a caustic etch prior to anodize, you might be able to detect variation in the aluminum by the residual smut. Play with the etch times to evaluate.

A. Long time no see, Randy. You didn't mention if the difference you are seeing is in the same load, or in alternating loads. It sounds to me that it's possible the parts that are substandard are overheating in your tank, causing a very soft and worthless anodic coating. Any major difference in the alloys (parts) should be evident after your etch, I would think.

Is there any difference in the coating thickness between the good, and sub-standard parts?

A. For dye ruboff, check your seal quality and temperature.
If the part is sticky, we found the cause to be in the desmut tank.
7075 has a high amount of alloy material, particularly copper, so a good desmut step is really needed.

Q. Our products have two aluminum materials: 6061and 7075. We've chosen the 7075-T6 to anodize the surface (black, and we don't care about brightness), but it's always having problems. Sometimes had bubbles, and sometimes had paint peeling off; we cannot find the reason. Is the cause the suppler or material?

It is difficult to make judgements about your problems as you have given us so little detail, but let me give it a go anyway.

Your problem with paint peeling may be something to do with the anodising, but is more likely to do with the paint application. When parts are delivered for paint there are many factors that can affect adhesion, from contaminated surfaces to poor paint application to poor stoving. If you can give us a detailed breakdown of your process we may be able to advise you better, but at the moment all we can do is generalise.

A. I think you will find that the major component in 7000 series aluminum after aluminum is zinc. White spotting is a common problem whit this alloy. Some have found that a 50% nitric plus fluoride helps in the deox stage. As far as bight dipping, it is nasty stuff and most try to avoid using it.

Q. I have machined parts from aluminum material 7075 T651 AMS QQ-A 250/12, ASTM B209 that had a clear anodize finish applied per Mil-A-8625 [link is to free spec spec at Defense Logistics Agency, dla.mil] type 2 class 1. My customer is rejecting the parts because the finish is not clear.

The finish has a brown/goldish tint. The finish vendor states the copper in the material will cause this color to appear. I need some more information on what is the appearance of a clear finish . Thank You.

A. Nowhere in MIL-A-8625 is a Type II Class 1 anodize described as "clear", only non-dyed (Ref. Para. 1.2.2). In fact, Paragraph 3.5 Class 1 states,"Any natural coloration resulting from anodic treatment with the various alloy compositions shall not be considered coloration."

If your customer requires a colorless finish, the anodizer will need to cut back on coating thickness.

I think you are being told a few half-truths about why the color has changed. 7075 only contains 1.2 to 2% copper; its main alloying constituent is zinc at 5.1 to 6.1%. I can't imagine that the level of copper in the alloy would cause this problem. Now, if the anodising tank is heavily loaded with copper, then I could understand it a little; even then I'm not convinced it has anything to do with copper.