Q. I am using AL 6061 plate. But I want to change the material and or finish both. Purpose is to be decrease warping and to increase the reflection of one side. So to improve the strength of the plate, will anodization work? What would be other options?
Also, I want to have polished surface as a surface texture, so will anodization affect finish?
Can anyone here provide me resources or suggestions to select the suitable finish selection or material and material heat treatment selection tool? Stainless Steel is also an option. Thanks!

A. Hi Manjiri. I can start the discussion by telling you that anodization is an electrochemical process that converts some of the aluminum on the surface of the item to aluminum oxide and similar compounds and that it will always weaken the item, never strengthen it. You can review our Introduction to Anodizing if you wish.

Anodization might also increase the warping if the article is very thin or it may have no measurable effect if the item is more substantial.

Both aluminum and stainless can be mechanically and/or electrolytically polished for reflection, but again, how much reflectivity and why? Aluminum can ideally reflect across a broad spectrum of wavelengths whereas stainless can look shiny while only reflecting in a narrow spectrum ... either can be a fine bathroom mirror, but only aluminum can be a telescope mirror. But anodization will reduce the reflectivity a little for some alloys (usually the not-so-strong ones) and hopelessly for others (usually including the stronger ones).

Please tell us what you are trying to do, then we may be able to help you get there :-)

Q. What is the difference in 6061 aluminum tempers stamped T6 and T6511? Most handbooks have the same properties, so why the 2 numbers?

But that quenching in water puts residual stresses in the aluminum, since there is a surface-to-center cooling gradient. The -T651 designation means the mill took that extrusion and gave it a 1% to 3% stretching, or permanent set, to get rid of some of those residual stresses. Now we can machine it and it shouldn't distort.

Finally, the final digit in the -T6511 designation (and how I know it was an extrusion, since this only applies to extruded stock) means that the mill is allowed to straighten the extruded bars, like in a press, to get them to meet the straightness tolerances.

A. To expand on what Lee so correctly pointed out, if you mix alloys of different tempers, while they compositionally might be the same, they can be separated by measuring their surface conductivity. From a finishing or chemical processing standpoint, this means they have different anodizing rates, appear differently when exposed to various etchants (e.g. nitric-HF or caustic) and may even appear different upon chromating. Chemically speaking, they are indeed quite different!

Q. "To expand on what Lee so correctly pointed out, if you mix alloys of different tempers, while they compositionally might be the same, they can be separated by measuring their surface conductivity. From a finishing or chemical processing standpoint, this means they have different anodizing rates, appear differently when exposed to various etchants (e.g. nitric-HF or caustic) and may even appear different upon chromating. Chemically speaking, they are indeed quite different!"

-When you say mix alloys of different tempers, what do you mean exactly. Mix in a kiln, use various tempers on the same assembly?

And following on from the initial question by Linda, Lee pointed out the manufacturing differences, but what are the actual differences in properties, e.g., machinability, weldability, strength, etc etc. Could T6511 and T6 be so different as to have different anodizing rates, etc., as Milt pointed out?

Q. How about the tonal qualities? Looking to use aluminum for bars in a musical instrument. Is there a difference between them in tone if you strike them?

Q. Hi there. I work in the extrusion of 6XXX alloys for many years. Indeed, I have a question regarding the difference between the T6 and T6511 temper as well. Stretching between 1-3% is performed immediately after extrusion and cooling and prior to aging. Stretching helps to minimise residual stresses from the extrusion process and give the final extrudate the necessary straightness.
So, can we use the T6511 in this case or do we need to perform extra stretching after the aging process?
Residual stresses are mostly seen on the medium strength alloys like the 6061 or our equivalent in Europe 6082.
Thank you for your help.

Q. Surface finish difference between 6061T6 and 6061-T651. I am interested in using the outside surface for sealing purposes. Is there a significant difference in the surface roughness between the two specs?

The T number is the temper designation, so this should not have any impact on the surface finish, that will depend on how the material has been treated or handled.

Q. My understanding 6061-T6 tubing is drawn or mandrel drawn and 6061-T651 is extruded tubing. So the inquiry related to a possible difference in surface finish between the two.

Q. Hi I have recently welded two 6082 T6 sample together and after this noticed that the hardness of the heat affected zone greatly decreased and am hoping to regain a hardness equivalent to that of a 6082 T6 sample. What heat treatment procedure would you propose?

One option would be anneal and re-age so as to attain the required T6 temper.

T6 /T6511 are the temper designations only. Hence final finishing operations (such as anodizing) would be same in both the cases. There would be absolutely no change in either chemical or surface properties.

A. Hi Arthanari. I believe that Lee answered that question --

" ... the final digit in the -T6511 designation ... means that the mill is allowed to straighten the extruded bars, like in a press, to get them to meet the straightness tolerances."

A. As the question is rightfully answered for the difference of AA6061-T6 Vs AA6061-T6511. If the T6 material is used as stock for such a geometry where exists very small micron size geometric features, there well not be dimensional stability of the geometric feature due to the residual stress in material -- and it will be ok with T6511.

Q. Is T6511 good for making small bends (angles less than 45 degrees )? Also what process would be good for making these bends without stressing the metal or corrupting strength ?

Q. I would like to know for AA 2618 bars in T6511 condition what are the ASTM/AMS Standards that are followed?

"Alcoa Aluminum Handbook
Aluminum: its forms, alloys, and tempers"
from Abe Books
or

A. Hi Varma. For the benefit of other readers, the "AA" refers to The Aluminum Association alloys and tempers designation system. But if you are trying to use ASTM specs instead of AA specs, you might see if ASTM B221 [affil. link to spec at Techstreet] conveys what you are trying to cover. Good luck.

How to test if aluminum has been stress relieved?

Q. Does anyone know a test that can detect if 6061 T6 AL has been stress relieved or not?

Thanks for the input!

Hi ioannis. Lee and Benedict have told us that to make T6511 from T6 involves controlled stretching and straightening, so it doesn't sound like something which could happen spontaneously. But please detail your situation rather than posing it in the abstract, and then people can probably be more helpful. Thanks.

Q. We are having an issue with a Mil A 8625 Type II Class 2 Red anodize on some 7075 T651 Alum.
The print calls to use T6 or 77351 temper plate stock only. I assumed that the T651 would be the same as the T6.
However the anodizer is having great difficulty in anodizing these parts. The material is turning black in the first process step for the anodize.
Any thought on if this is due to the T651 call out vs. T6?

A. 7075 turning black after a sodium hydroxide based etch is normal. It's a high zinc alloy, if I recall correctly. They'll need a good desmutting agent to remove it (the "smut" from the etching process). The alloy itself tends to anodize to a yellowish color, which may affect the dying process, but it should dye to a red color without problems. The color hue will probably be a little different than the color of a 6000 series aluminum. 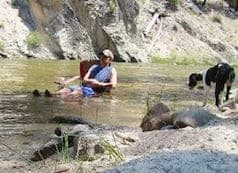 Q. What is the exact process to temper extruded 6063 aluminum to T66?

To get to the -T6 temper, the aluminum billet is heated to about 990 °F, then quenched in water, then aged at about 350 °F for around 8 hours. I can't find anything on what processes are changed to achieve T66.

A. Hi Darren. Hydro.com and other sites say "mechanical property level higher than T6 achieved through special control of the process", and several sites offer those values for mechanical properties of T66 vs. T6, but I don't quickly see any place that tells you exactly how to obtain them.

Thanks Ted - All I found was the same verbiage. "Special control of the process" I'll keep digging.