- The Simple Idea Which Faraday Discovered Makes Chemistry & Electrochemistry So Much Easier!

You've probably learned that elements are made of very tiny atoms, and that atoms consist of a nucleus at the center which has a number of protons and neutrons glued together, and a number of electrons orbiting the nucleus, sort of like planets orbiting the sun. Although this model is simplified, for our purposes it's enough.

Each proton has a positive charge, the neutrons have no charge, and each electron has a negative charge; every atom has as many electrons as protons for a resultant electrical charge of zero. The number of protons in the nucleus of the atom is called that element's "atomic number" -- it determines what the material is. If it has one proton it is Hydrogen (H); if it has two it is Helium (He), if it has three (as in the picture) it is Lithium (Li). If it has four it's Beryllium (Be), five it's Boron (B), six it's Carbon (C), seven it's Nitrogen (N), eight it's Oxygen (O), nine it's Fluorine (F), ten it's Neon (Ne) ... on up through the 92 protons in Uranium (U).

The number of neutrons isn't as important, but a nucleus often has roughly the same number of neutrons as protons. Protons and neutrons are close to the same weight and electrons are of almost negligible weight so the "atomic weight" of many elements (the relative weight of one atom of the material) are somewhere around twice their atomic number, usually a little more. When two atoms have the same number of protons but a differing number of neutrons, we call the resultant materials "isotopes" of each other -- most of the properties of two isotopes of the same element are the same, but there are some differences, such as (obviously) differing atomic weights.

Note that this is a two dimensional picture of a three dimensional situation. Electrons don't orbit the nucleus like a ring, but occupy a shell shaped space like an eggshell or ping-pong ball.

After subtracting the two electrons of the inner shell from lithium's 3 electrons, it has 1 electron in the outer shell, beryllium has 2, boron has 3, carbon has 4, nitrogen 5, oxygen 6, fluorine 7, and neon 8. If you picture a wheel for a truck with provision for eight lug nuts, the wheel is balanced if all eight are in place but out of balance if any are missing. It is this difference between the "room" for electrons in the shells and the actual number present in them which drives chemical reactions.

Two lithium atoms of valence +1 could get together with an oxygen atom of valence -2 to form Li2O with a total of eight electrons in the outer shell; or three lithium ions could combine with nitrogen of valence -3 to form Li3N.

Although we can't accurately predict every chemical reaction from this alone, especially as we move on to more electron shells with different numbers of electrons and the more complex way they are filled and balanced, it does go a long way. For example, we can predict boron nitride (BN) from boron's 3 outer shell electrons and nitrogen's 5, and that neon with its full shell of 8 electrons is balanced and "inert" and will not combine with other materials.

Moving on to Electroplating

If we have a plating solution based on nickel, like nickel chloride (NiCl2), and we put a battery between two nickel electrodes immersed in that solution, the battery will pump electrons from its positive pole (which we call the anode) to its negative pole (called the cathode). As two electrons are stripped away from the anode and flow through the wiring to the cathode, the nickel atom can't remain an atom with balanced proton and electron charges, but becomes a positively charged nickel "ion" (Ni++) which dissolves into the NiCl2. At the same time, the cathode now has two extra electrons, and when a Ni++ ion approaches it, the electrons merge with the ion to re-form a nickel atom. Thus, moving two electrons from anode to cathode via the battery causes one nickel atom to dissolve from the anode and plate out onto the cathode.

If you are plating silver, which has only one electron in its outer shell, valence +1, then pumping one electron from anode to cathode will cause one atom to ionize from the anode, migrate through the solution, and deposit onto the cathode.

If you are plating chrome with its valence of +6 onto something, you'll need to move 6 electrons from anode to cathode to move one atom.

Faraday's Law relates the electrical current flow to how much metal will be deposited.

Old editions sometimes available
from Abe Books
or
from Amazon 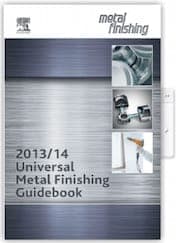 pdf is currently available from academia.edu

If you find the calculations tiring, the Metal Finishing Guidebook has a great chart ( ^ page 880 in 2013/2014 edition) which does all the math for you, giving you the number of ampere-hours required to deposit plating of 0.001" thickness on an area of 1 square foot.

You can scale this answer up or down for different thicknesses and surface areas.

We simplified a little bit in claiming that Faraday said 96,485 ampere-seconds will deposit 1 gram equivalent weight divided by the valence. Actually it will do that if the process is operating at 100% efficiency. But what may happen is that some of the electricity gets "wasted" hydrolyzing water into hydrogen gas and hydroxide or to some other undesired reaction.

Suppose for example that you instantaneously applied a huge current. The electrons will move from the anode to the cathode at the speed of light, but the nickel can't possibly dissolve instantly, and the ions migrate over to the cathode instantly and plate out instantly. Rather, that huge surfeit of electrons must be satisfied some other way, and what is actually going to happen is that those excess electrons will pull a lot of hydrogen out of the water at the cathode to evolve as hydrogen gas. In actuality, the efficiency of some plating processes can approach 100% if done at reasonable current flows, but the efficiency of some other plating processes like chrome plating might never exceed 25%.

Whenever we try to plate too fast, too much hydrogen evolves, or the plating does not have enough time to build a proper crystal structure ... and the plating is discolored, frosty, or non-adherent -- a situation which we call "burning".

As explained, it is ampere-seconds -- current x time -- which does the electroplating, not voltage. The voltage to be applied is simply whatever is needed per Ohm's Law (V = AR) to make the current flow at the correct rate.

Although we know some principles like Faraday's Law and Ohm's Law, we do not have sufficient knowledge to understand from theory and first principles how much amperage or voltage we can use without burning -- that is all just empirical knowledge. We know, for example, that bright nickel plating can usually be done at 40 amps per square foot of surface area; but we know it because we've tried it and that's what works -- not because we truly understand all there is to know about ion migration and field gradients, boundary layer mechanics, etc. Good luck.

If you are seeking a product or service related to finishing, please check these Directories: