Creating raised lettering on a metal rod via electroplating

I have a client who wants me to plate lettering onto a steel rod they want to be able to feel the letting as well as read the words. I was wondering if anyone could tell me how easy it would be to create raised lettering on a steel rod. For example, if I was to coat the rod in a polymer or wax and scratch away the areas of the lettering would I be able to get a practicable layer of plate so that the letters would remain visible and tactile. If for the sake of simplification it is assumed the scratches in the polymer would leave the sides of the polymer perpendicular to the rod surface (leaving a rectangular cross-sectioned channel in the polymer) what sort of cross-section would the lettering have? I assume not square due to the concentration gradient of the metallic ions. What parameters could be altered to change the letter profiling?

Thanks for your time and all the best,

It's very doable in the way that you described. Despite concentration gradients, with enough attention to detail, you can accomplish any level of precision you wish. 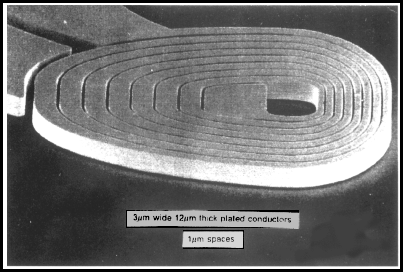 The watch industry uses a method to put raised metallic numbers on the watch face which might work well for you.

A flat piece of SS is coated with a resist and then where the words are needed, the resist is removed. Then the words are electroformed in Ni or Cu and peeled off the SS using clear tape. The back side of the words is sprayed with adhesive and then pressed onto the rods, and then the tape is peeled off.

The adhesion strength of the tape used to remove the words from the SS must be less than the strength of adhesive used to attach the numbers to the rods.

This works well for high volume production. Many sets of words can be electroformed on one mandrel, peeled off with tape, cut up into individual units and then attached to the rods.


Photo resist materials are special polymers sensitive to light. They are adhered to the surface to be treated and exposed thru a negative that contains the desired lettering or design in black. The exposed polymer hardens producing a mask. Unexposed polymer remains soft and water soluble so it can be washed away selectively.


It might be easier and faster to use a photo resist and etch away the surrounding metal. Either raised or indented lettering can be done in this way.

Thank you for all your responses. I am going to try the photo-sensitive polymer method first. My client wants the lettering and the rod to age/oxidize at the same rate so is it possible to plate for example; Fe onto Fe rather than using two different metals.


If you acid etch through the photomask you will end up with what you want, same metal, only some areas eaten away. Just a final note, etched areas are a little more prone to rust due to their rough and sensitized surface. Give the whole part a light-mid etch to overcome this.
GM