Watts Nickel bath gassing too much


I have a Watts bath that is gassing a lot, after a few minutes of turning on the rectifier, you can see a white foam over the bath, I don't remember to see it as normal, the deposit looks ok, bright and in general good appearance, and my supplier says that it is due to impurities in the bath.

So the question is :

Is this normal?
Is my supplier right?
If he is right what kind of impurities cause this effect, in order to apply correctives.
what other causes exist that can cause that type of gassing?


Unless you're deliberately using a surfactant, you should see no foam. Sounds like organic contamination.


I am not so sure about it being due to impurities. If you are using a wetter/anti pit foaming upon operation is normal, lack of foam is indicative of other problems. Excessive gassing is a relative term - how do you say what is normal and what is excess- it depends on the current being applied and the surface area of the anodes and parts.


Thanks to Mr G. Brackett III and to Mr Gene Packman

Ok gassing too much is a relative term.. so..is normal to see the bath covered with white foam? in all over the bath surface?
sometimes it is not gassing I mean I don't see foam...


Thanks for your advice.... I have already send today samples to my supplier and I am waiting the analysis result.

Like I said, if you are using a wetter/anti pit it is normal to see foam on the bath - with some materials (i.e. "mechanical" wetters) all over is normal. If you are not using wetters (and if that is the case you are probably getting gas pitting!) then the foaming is from a drag in of cleaner (the impurities). Many manufacturers include some of the wetter/anti pit in their single additive brightener systems or in the brightener/leveler component of two additive systems.

If you are getting good quality deposits you should not be unduly concerned.

As others have stated reasons for excessive gassing are inefficiency. This would be due to low metal concentration, low nickel chloride, low operating temperature or clogged anode bags.

So, if the deposit is good, the rate of deposition is good you can rule out most of the above problems and take the advice of your supplier. To "cover themselves" most suppliers (and I am one) will tell you to carbon filter to remove organic impurities. This should be done with a light carbon pack on your filter at all times or the use of carbon cartridges in a cartridge filter.


Thanks, I appreciate your help that give me ideas about the subject. Next week I'll receive the results from the lab.


If you found gassing more than the normal situation, it is like what other had pointed out, either your wetting agent (or organic impurities) is high or the efficiency of your Watt bath had been affected. For the first case, normally it will not give you too much of a problem as most wetting agent are not co-deposit with the plated Nickel film, if not, then you will have poor ductility in your plated Nickel layer (this can be confirm by hull cell test and doing a bending and listen for cracking sound at the high current density area).

I hope this can narrow down you search in trouble shooting. Good Luck


Hi,
It looks to me that you have a bad anode contact or low anode material. Check the titanium hooks and also look after if they are twisted around so they have only a little contact point. 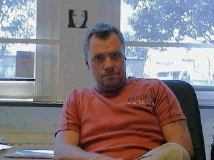