Source of Cyanide not known in WWT

I run an anodizing and winc phosphate shop. Lately I have begun to see traces of cyanide in my Wastewater (.02ppm of total cyanide). I have contacted all chemical vendors and they have told us that there is no cyanide in any of the chemicals they sell to us.
Does someone have the same issue in their shops. Please share your ideas on how to get rid of this issue and any suggestions for treatment.
I really want to know why I have cyanide in WW while there is no cyanide in the chemicals being used. Is there a by product involved?
Thanks for your time
Hemant 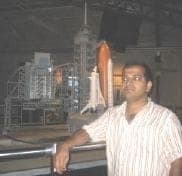 Traces of cyanide are sometimes found in salt, sodium ferrocyanide has been used as an anto-caking agent. It is also found in Nature, in various natural products.

Have you sent samples to an independent lab, and tested for total cyanide versus free cyanide? Are you sure you're not getting a false positive?

Is there a possibility that cyanide is a surface contaminant on the parts you process? For example, there are still a few heat treating shops that use cyanide based salts for carburizing or carbonitriding steel.

0.02 ppm is about half of nothing. Are you sure the test method is valid at this level?
Apart from that, cyanide is very common in the environment. It occurs in foodstuffs (cassava), car exhaust fumes and is even used by some insects as a defence mechanism. If you smoke, you probably have more than that in your bloodstream. Not to worry, because it is so common in nature, your body has about six different mechanisms to neutralise it. The problem arises when these are overloaded and the downhill path from then on is steep.
Cyanide rapidly decomposes in the environment and for that reason most environmental legislation does not concern itself with very low levels.

At .02 ppm, it does not take much to show up in your waste water, especially if you are doing any kind of evaporation treatment of waste waters.

We have gone through the same, at least twice. First time it was from the potassium ferricyanide in our chemical film solution, Iridite 14-2. We changed to Iridite 14 to eliminate that source.

We had subsequent samples at ND in analysis, and then it showed up occasionally as trace. We found that the Hach kits for testing Zn in our wastewater also have potassium ferricyanide present.

We also use calcium chloride in a precipitation process. We believe that potassium ferricyanide is also used as an anti-caking agent (calcium chloride is often used as a deicer). Analysis showed no cyanide so we may be getting a better grade than what goes on the street.

Anyway, if it is less than 0.5% ( I think), it does not have to be listed on an MSDS. You may have to sample your chemicals to find the source.

Dear Dave and Steve,
thanks for the information.
Yes, 0.02mg/l is a problem since city limit is only 0.065mg/l. I know I am still low but I am very close sometimes. The problem is that I don't do anything for cyanide treatment. If we have levels that low, should we set up a cyanide treatment step,.
My process does contain nitrites and nitrates and they may be causing the interference. I am sending out a split sample to another lab and then I can compare the results.

I hope its not coming from heat treatment salts, etc...u know how hard it is to ask your customer about such sensitive issues. But I can try.
In the meantime, I have begun to use more bleach. I am planning to use Iodide starch paper [affil. link to info/product on Amazon] which will give me an idea that I have enough chlorine in the system.

Any other thoughts?
Thanks,