I recently read some thing that suggested that a chromic anodised aluminium surface may not be a good electrical insulator. Does anyone have any data on this?


Anodizing is an insulator. Chromic acid anodizing is very thin compared to sulfuric, so is proportionally less. Water of hydration in the anodize lowers the dielectric constant to a small value compared to published data for aluminum oxide.


I can add a little to illustrate the fragility of a chromic acid coating. One shop where I worked had a test light consisting of a 1.5 volt battery, a light bulb and two wire leads with probes. If we touched the two probes to an uncoated aluminum surface, we completed the circuit and the light went on. An anodized surface would not conduct, so the light wouldn't go on when the probes touched an anodized surface.

P.S. Most anodizers already know this test. You can also use a multi-meter set on the ohms scale or an inexpensive automotive conductivity tester available at your friendly auto parts store near you. 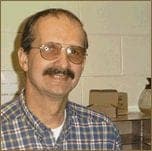