An ongoing discussion beginning back in 2006 ...

Q. We are going to be developing a program for etching a sputtered layer of TiW from our ceramic using 30% hydrogen peroxide. I had read that the H2O2 can be neutralized by dropping the concentration to 5%, then adding a 50% solution of sodium metabisulfite and water. It could then be discharged down the drain with 50 times its volume with water. Does anybody have any experience with the disposal of H2O2 that also contains TiW? Any recommendations would be greatly appreciated. Thanks!

A. Hello, Chris. There are two likely problems with your plan from the get-go. First, your wastewater is probably categorically regulated; that means you can't dispose of it without permits even if it is innocuous. Second, dilution of industrial wastes as a treatment scheme is usually forbidden by law. I would suggest locating an industrial waste treatment consultant or a knowledgable supplier before you go much further.

A. I do not remember if either Ti or W are regulated.
For peroxide, it will react with sugar. I am significantly burned from 70% peroxide with a nearly explosive reaction. It generates heat which speeds up the reaction greatly. At 30% I do not think it will react violently, but there is always the day that someone dumped a lot into the waste stream.
As Ted says, you need to talk to your local wastewater and DEP offices. First!

A. You would have something else in there but H2O2 to strip the TiW which you haven't mentioned. As far as the peroxide goes--
H2O2 is basically unstable in the presence of many metals and in concentrations of 30% will be subject to violent exothermic decomposition, so be careful. If you notice it fizzing on its own it indicates it is decomposing by itself and will get faster and faster with more and more heat.
The cheapest way to destroy it will be to experiment at different low concentrations, say about 5%,in SMALL lots, by adding small amounts of Ferric iron which is one of H2O2's most effective "destablisers" to try to get a controlled fizzing which when it stops, you have no more H2O2.
Have a big freeboard in case it goes OFF. Be Careful.

Don't know about the other components though. 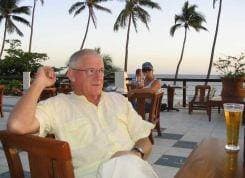