An ongoing discussion beginning back in 1999 ...

Q. I am concerned with most platers saying it isn't possible to plate safely at home, for one thing I would never do it in my house but my garage sure. I have an inexpensive draft booth set up for painting, which is a hell of a lot more dangerous than any plating I've done, yet painters are rarely saying anything about not painting at home, why is that?. inside the draft booth I have a metal storage/shelving unit that has an appropriate poison warning's. I keep it a lot cleaner than any plating shop I have ever seen, I wear better safety equipment than I have even seen at a plating shop also. I pay for my waste to be thrown away, and it's not extremely expensive, for a 55 gallon drum all I pay is 300.00 canadian. everything stays in a locks cabinet in a locked room. One more thing I am only sixteen and I have no one who is there to show me what to do. I really don't understand why everybody is so uptight about it, my local platers don't think it is a big deal at all. So to all you wannabe platers out there, get involved, it feels great to do it yourself.

A. I applaud your responsible attitude toward safety and environmental responsibility, Barrett. You are certainly right that it is easy to overstate the dangers -- plating solutions are not plutonium! Still . . .

I personally find the risk out of proportion to the benefit. I'm not wagging my finger and "forbidding" plating, but when it's proposed as a hobby -- which often means something to just idly and mindlessly tinker around with -- I personally think there are lots of better ones :-)

! I agree with your points entirely, that's scary about that copper cyanide incident. I do not have to worry about much of this because I wear a self contained breathing apparatus (hood) and a full chemical body suit, with bodies. All I really do is brush plate Potassium Aurocyanide. I do applaud your safety concerns here, I am not against that. I hope to soon get a degree in chemistry and open up a plating shop, gotta wait till I'm out of high school though.

Q. My hobby is drag racing this ever changing turbocharged Suzuki. Let me tell you this thing demands serious attention and it is no where near mindless or idle :> . A hobby for me should be very absorbing and demanding. The risks should also be very clear and understood and compensated for as best as possible. Just because the plating process is dangerous and complex shouldn't exclude it for a hobbyist.

This web site is good in providing pertinent info for one to consider. I want to start up small scale powder coating operation. Mostly for motorcycle frames and small parts. Do you have any advice or info on small scale setups ? THANKS . 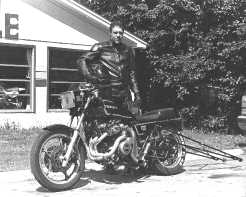 A. Peter You may wish to look at a system by the name of HotCoat which should work great for motorcycle needs.

I have a Machine shop and access to Hazardous waste disposal and can't see spending the amount of money needed to start a chrome plating process on a small scale.

A. One of the main reasons for powder coating is its environmental friendliness because there are no solvents as in painting; instead you melt the coating on :-)

But plating is different than powder coating, because it usually rquires toxic & dangerous chemicals, and because all of the waste products are considered hazardous and are regulated (even hose water) under 40CFR433; it can be a problem to do it as a hobby.

In your drag racing hobby, Peter, I'm sure you received some hands-on training. I'm sure you learned under personal instruction. I'm confident you belong to various clubs where you have the regular opportunity to interact with your peers. As a hobby plater you would be welcome to do much the same, attending meetings of the American Electroplaters Society, etc., but we never find hobby platers attending and gaining that learning experience for some reason. I hazard the guess that it's because they want to maintain a low profile when they realize how harassed the professionals are by government, environmental groups, and neighbors.

RFQ: I am interested in purchasing a chrome plating machine for small/home shop use. It would be used to chrome finish small motorcycle parts, bolts, shifters, brackets, and other small parts I machine. Any assistance if finding a supplier for a suitable machine here in Canada would be appreciated. Thanks in advance.

A. Hello, Rene. Please see our Chrome Plating Tutorial. You will find why there are not chrome plating machines in quite the sense that you probably envision, but there are kits for some other types of plating. Good luck!

Q. I have a 1946 Gerstner tool box that I am refinishing. The hinges, latches, and corner guards are steel with a nickel plate. They have lost their shine and I would like to nickel replate these items myself. My question is can I do a reasonable job in replating these parts if I degrease, electroclean, acid clean in muriatic acid, and then nickel plate with a nickel solution offered by any one of the suppliers found on the internet? Will a 6 Volt lantern battery be sufficient to use as my DC power source? Thanks for your help.

A. For what you are trying to save by not having a professional do it, you will spend 5 times that amount on chemicals, tanks, anodes, nickel,heater, disposal costs when you are done, etc. This is not as simple as dunking this part into a tub of chemicals and waving a magic wand (my boss thinks that sometimes) :-) Your lantern battery would not come close to what you need. Plus, the odd shape will pose some challenges. And if you screw it up, you will have lost it. Is it worth it to save a little money?

Send it out. Let the professionals handle it. It will be much cheaper in the long run.

A battery is fine for a schoolchild to conduct an electroplating science demonstration, but it has neither the variable output nor the power you would want for anything serious.

If you were to look at a battery and an electroplating cell from an electrochemical view, you would see that they are fundamentally the same thing: each consists of hunks of two different metals with a conductive electrolyte between them and external wiring from one pole to the other. Hooking a battery to an electroplating cell is akin to connecting two batteries together with crossed polarity; the bigger, more powerful battery will "win". So trying to plate anything substantial with a dry cell battery is rather like trying to charge a car battery using an AAA battery -- the thing you are trying to plate may comprise the bigger battery and is running in the wrong direction. A proper power supply would be best, but a 6-volt motorcycle battery and charger might do as a power supply for starters. Good luck.

Before I made the investment in a variable DC power supply, I wanted to ask the "experts" their professional opinion. I will now begin my search for a good used DC power supply. Thank you for your input.

A. I copper and steel plate myself, I've found that an old analog car battery charger is a good base for building a variable power supply.

Q. I want to electroplate acrylic items in an acid bath -- in my backyard. I have a brick shop out back, but I keep reading about the EPA: "you own it forever".

Spraying copper onto the acrylic, then plating items no larger than a human hand doesn't seem like a large operation -- but can it be done near homes?

A. Hi Andrea. First let me explain for the benefit of other readers what you meant by "you own it forever" ...

All businesses are, of course, always looking for less expensive ways to do things -- including disposing of their waste. Unfortunately, over the decades, this has sometimes resulted in paying a company to treat & dispose of your waste, only for that company to have been a 'midnight dumper'. Months or years later the waste drums are discovered and the midnight dumper can't be found ... perhaps he used a fake I.D., sent the money to the Cayman Islands, and retired in style :-)

We taxpayers were then on the hook for the cleanup costs ... until the EPA decided that the solution to this cleanup cost problem was that no matter who you pay for disposal or how much you pay them, the generator of the waste remains responsible for it forever. Furthermore, because it is generally impractical to apportion responsibility for how much of the waste was whose, 'joint & several liability' means whoever they catch is responsible for the whole batch. Let's hope Bill Gates and Elon Musk didn't have chemistry sets as junior high schoolers or they might be in a spot of trouble :-)

If you avoid attention-getters like chrome, and you do not use any cyanide-based chemicals or hydrofluoric acid, and you generally act responsibly, my guess is that you won't actually run into trouble. But if you are actually selling plating services or plated items, no way can anyone guarantee that you will stay below the radar. If you have a dispute with a nosy neighbor, a town building inspector, etc., it can be trouble because what differentiates plating from other hobbies, even very dangerous ones, is that the EPA targeted electroplating back in 1984 to be the first categorically regulated industry, i.e., plating waste is regulated regardless of whether or not it's actually toxic. Best of luck.